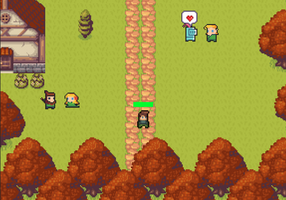 This is the biggest game I've made and the biggest team I've ever made too(4 people, if you include the helper in the story and the person leave in the middle, then 6 lol)

First time adding a boss fight. It took much longer than I expected and I like the effect it shows.

Team manager. Everyone in the final team did his work and the they are merged perfectly.

Certain level design. This time is not based on random anymore.

Learn FMod and it is a powerful tool for music design.

Time estimate. My plan for the boss fight was 1 day, yet somehow it took me 3 days to finish it. And it does not turn out very good, explain in next one. And because of this, the whole plan for development is messed up, which caused we didn't have enough time to let players test.

Balance of battle. Several players complain that it is too hard in the boss fight. There are 3 reasons: 1. there are not medkits in the game, and if you die at this level, you have to restart it. 2. the collision and attack mechanic is not very clear. 3. minions spawn in the boss fight are a lot, which means if you didn't finish the boss quick enough, you fail. 4. the most important one, the curve from the last level to boss level is steep, so players get lost easily.

Next time I'll try some new genres. No topdown again!

it's Valentine's Day, and you are the only one that does not have a date...